There's something inherently emotional about watching a child moving away from you at speeds you cannot yourself maintain. It's "so metaphorical!" to semi-quote the girls. 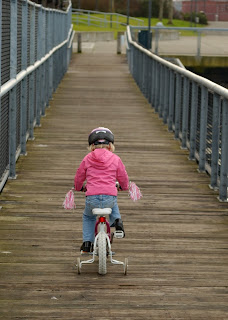 After all, what better way to represent the growth and ultimate freeflying of offspring than with a photo showing one of them riding her bike away from you with no hesitation, no thought of what she's leaving behind.

I watch L riding away from me down this boardwalk and think about how she's destined to leave one day, to ride away either by herself, or with some greasy-haired, no 'count biker dude boyfriend, or to college, and I realize my baby was growing up.

In other words, I took L and her bike to the park yesterday (Sunday) morning and she had a blast. Our street is a bit too bumpy, and a bit too sloped, to make it ideal for learning to ride a bike. Either you're going too fast (downhill) or too slow (uphill, needing constant pushing from a parent). So we figured if we could get the girls to some smooth, flat surface, they might have a better experience. That was the plan. Note that I said "the girlS."

But things didn't go as planned. (I know, I was shocked too!)

K's been in a bit of a state lately. Honestly, we all have been. We got bad colds over Christmas. And there's the inherent stresses of the holidays (good as well as not so good). And the girls were home for 2 weeks, which is a mixed blessing, as it means both they're home, and they're not getting the activity/interactions they're used to at school. So we've all been a bit less than jake. And K is in one of her 1/2 yearly stages where she intentionally pushes buttons, pushes L, pushes us. So yesterday morning she was misbehaving and got a timeout but refused to go upstairs, so I walked her up and told her she needed to behave or she would lose privileges. Like maybe going to the pool. Or to the park. And then she spit at me (really, just a bronx cheer, but still, with a smirky grin on her face, and very intentional). So I lost my temper and said "Ok, you've just lost the privilege of going to the park to ride your bike."

It was one of those moments where as soon as you speak, you wish you could take it back and say something slightly different - because this was a lose-lose-lose proposition. She won't get the exercise/fresh air. I won't get to spend time with her. And M has to stay home (rather than either come with us, or go do the week's shopping). But once I say it, there is no way to back up. So L and I head out while K dissolves in tears. With M having to clean up that mess.

And L had a blast. 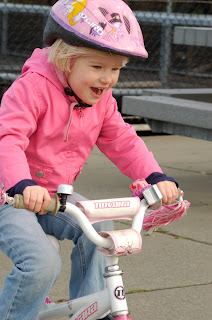 Getting the hang of it
I'm sure K would have as well.
(It's amazing how fast you can make a kid go, when you give them a good stiff push on a steep slope!) 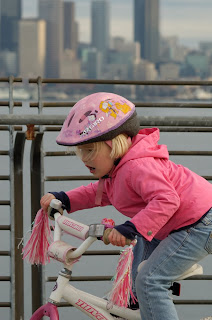 Moving... not as fast as it looks
Actually, L has a built-in tendency to toss herself off things willy-nilly. Like the pool deck. She's got a bit of a thrill seeker in her I suspect.

So our approach was to spend a bit of time peddling on the flat cement, then out on the boardwalk ("Dada?" "Yeah L?" "What if this all fell down?" "It's not going to fall down." "But what if it did? For real?" "Then I'd climb us out." "But Dada, we'd be falled down." "I could get us out!"), then I pushed her up the path to the viewpoint at the top of the view tower. And then we went back down, with me holding her back. And then back up again. And back down. And this time she got annoyed at my holding her back. By the time we reached the last (small) ramp, she wanted me to just let go so she could go fast. And I did. And she did. And her giggling echoed across the park.

I mean, she really got a kick out of it. So I had to push her back up and she rode back down. And we did it again. And I told her that we could do it "one more time" before we had to start back.

I wish M could have seen it. She'll see it soon enough, I guess (and she's been seeing them both swimming, since they get into the club on M's membership and I'm not a member). L just got such joy out of going fast.

Like a fledged bird, leaving the nest. It's all but done now, isn't it. Goodbye little 4yo!

She stops. She looks back, yells for me to hurry up because she needs my help: 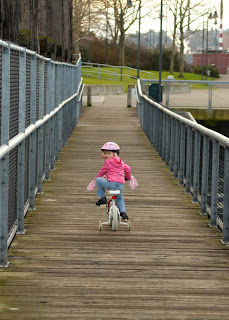 She's stuck on a particularly lumpy board, and can't go anywhere. And I realize that there's a a chance she may never leave home, not to mention our bed.

And then we took video to show to M and K when we got home:

love the photos! They tell the story so well BUT the video took me back about 16 years ago: bike with training wheels, little girl in pink with a huge smile doing circles. Just the setting is different, the hair lighter and the voice on the video a bit lower but it could have been my M! kim