Last week Seattle was "pounded" by a snowstorm (and subsequent ice storm) that dropped upwards of 4-6 inches of white on the city. As you can imagine, if you're from around here, things quickly slid to a halt. (And if you're not from around here, and imagine that 4 inches of snow isn't really that much, you're right, but this is Seattle so everyone freaks out when it does anything other than rain (we even have "sunshine slowdowns" in traffic, when the sun manages to come out), so it was SNOWPOCALYPSE 2012!

What this meant, among other things, is that the girls were out of school for 3 of the 4 days that were scheduled (Monday was Martin Luther King's Birthday), and that in turn meant that parents all over the region were driven crazy by their snowbound children. Including parents in our neighborhood and more specifically, in our house.

I knew the storm was coming (they'd been forecasting it in some for for 10-12 hours months) and had my laptop at home, so I "worked" from home on Weds, the first of the girls' snowdays. This meant that I worked in the morning, while M took the girls out into the arctic conditions.

And then they returned, or M and L returned, and I was suddenly on-call to go be with K on the sledding hill.

When I got there, I found K looking like this: 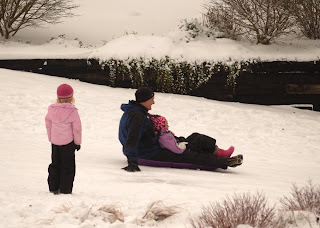 K, watching neighbors sledding
As soon as I walked up and she saw me, she turned and buried her face in my legs, crying. It turns out that she was having a horrible time, feeling left out. No one was asking her to sled, no one was offering her a ride. And as we only have a snow disc, she was feeling out of the loop.

The thing to realize is this: K had never been sledding. We'd tried a couple days before, when the snow first started, in our yard, but it wasn't enough snow and wasn't enough of a hill to really work. And more importantly, it was with her parents, not with cool neighborhood kids. Who had a sled, not a lame-o snow disc.

I'd brought the snow disc down with me, and I asked if she wanted to ride in it. "With you?" I said yes. She shook her head. I stood with her and we watched a bit, then I asked again and this time she grudgingly agreed to go. And we did. And she almost had fun. A few more turns, and then a neighbor girl asked her if she wanted to ride with her, and K was suddenly in 7th heaven. She was being included, and she was having a blast.

So K sledded and I disced and eventually we headed in for lunch (everyone else was doing the same), and we ate and chilled out for a bit. And then I looked up and saw beautiful light and asked K if I could take a picture of her. And she agreed. And I got these: 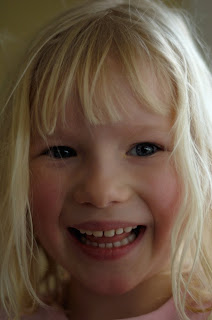 Happier now, after a positive experience on the "slopes" 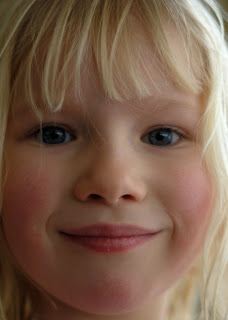 And then she took the camera and took this one of me: 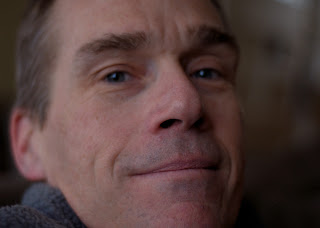 Not bad for a 5 yo!
And then, after a bit more resting and reading, we all went back out, K&L&M and me. And this time everyone had a great time. There were neighborhood kids to sled with, neighborhood girls riding their own snow discs (which put our disc into a different light!). And K was getting comfortable with the whole idea of careening down a slick hill with little or no control, on her own: 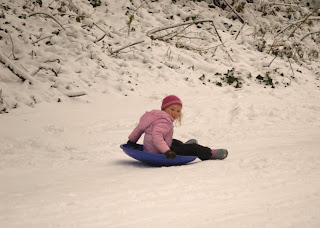 L didn't have any problem doing that, but then she's sort of that kind of girl: 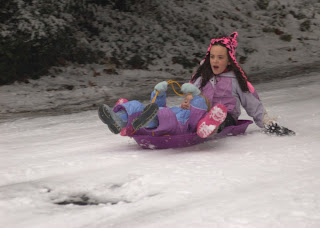 And M didn't have any problem with it either, but then, she and I had had martinis at lunch: 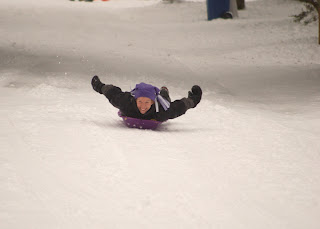 M, showing them how it's done! 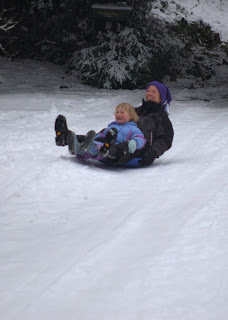 M&L on an end-of-the-day run 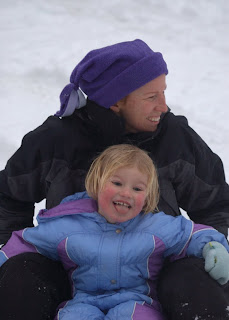 Aftermath
Ultimately, it was a good day for the family. It started out rough, but everyone adjusted and got into the swing of the experience, and we all had fun and crawled into bed that night feeling happily exhausted, with snow still falling, and the promise of another snow day ahead!
Posted by pvz at 11:02 PM

That is fantastic!!!! Kate reminds me so much of Austin. Things have to be going *perfectly* to be happy and content. It's a constant challenge for me. I wish we had a hill like yours in our neighborhood! Thanks for sharing!