Saturday it was blustery and cold and I did the first race of the PNW-ORCA Winter Series on Lake Union. The wind made the water lumpy and disorganized, which meant that Jeff and I had a challenge keeping our seats. And it meant we weren't able to do what we'd planned, which was to get a jump at the start and put some distance between us and a lot of the other canoes.

We've been training to push hard, and we'd intended to try and bust out at the start. Instead we sort of wallowed out, with me paddling on the left a goodly portion of the time, just to make sure we stayed upright.

And the wind was windy. And the cold was coldy. And then it snowed. And it snowed as we paddled. We caught most of the others by the time we were 1/2 way to the Ballard Bridge. And we did fine.

Here's a picture of the start, which was off of Gas Works Park. 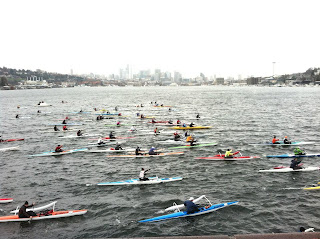 bumpy start
(we're somewhere way in the back, putting ourselves in a hole)
The wind was blowing from the west-southwest. Which meant not only that the wind bumps were reflecting off the breakwall at the park, making for the choppy conditions shown in the picture, but that we had a headwind all the way down the ship canal to the Ballard Locks. The wind eased some on the way back (which meant that we didn't have it pushing us along going east). But it was fun.

Here's our track for the race: 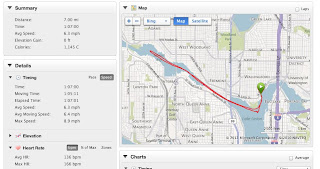 We came in at 57:34, which is fine. We were the 16th canoe to finish (7th oc2, first sr. master oc2) and though we didn't manage our unofficial goal of averaging 7mph, given the conditions, I'm good with it.*