(one of the many "catch up" posts I ought to be posting. not sure how many will actually make it up here, but here's one, at least.)

A couple of weeks ago, K paddled in her first outrigger race.

I'll pause a moment to let that sink in, because obviously everyone reading this blog understands the monumental significance of that sentence.

This accomplishment was, as you may well imagine, fraught with... all kine stress and thrill and excitement.

I've been talking up paddling since shortly after I started, and the girls, being nice, pre-teen children, have taken the bait and talk excitedly about it themselves. Not that this means they understand anything at all about what is involved. But at least I get the lip service. For now.

A couple fellow paddlers with young children decided this year to make an effort to have a keiki (children) team for at least one of our sprint regattas. We tossed our hate into the ring too. K said she wanted to paddle. L would have loved to paddle as well, but at 3yo, she's a bit under the cutoff of 5yo.

There's something extra special about watching little kids paddling these 400 pound canoes. there are 5 children, and 1 adult (who steers), and depending on the experience and amount of practice and size of the teams, the steersman/woman does much of the real work. The races are 500 yards (meters?) and involve a turn around a buoy after 250. And turning an outrigger is very difficult if you don't have much speed going into the turn. And these canoes frequently don't have much speed.

But we were going to do it, and so, a week before the race, it was time for a practice. K was excited all week long, but on Saturday morning she collapsed in tears. She didn't want to paddle. She hated paddling. She was never, ever, going to paddle in her life ever again.

This was, to say the least, a bit inconvenient, given that 4 other kids and our steerswoman were going to be expecting her at the beach. M and I tried to talk to her, tried to explain that when you commit to something, you need to follow through, especially when there are others counting on you. She wasn't buying it.

So I told L that she could paddle, and we started to get her dressed for the rigorous 15 minute workout. I wasn't sure what would happen, given that she was technically too young to race, but we'd cross that body of water when we came to it. L was enthusiastic and hurried to dress in time for me to get her to the practice.

Which spurred K to change her mind. Which caused some complicated feelings on my part, given that I'd told L she could paddle instead. We ended up going, as a family to the practice, and while K sat in the official boat, L come with M and me and a couple other parents in a second canoe, paddling alongside the one which was "working out" (and I use that term loosely).

All of which is intro to these: 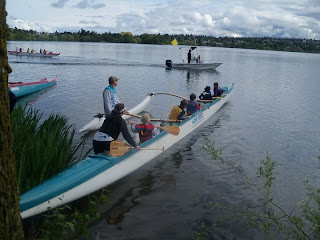 Getting ready to shove off.
I'm about to give K (who is sitting in seat 5,
immediately ahead of our steerswoman-extraordinaire)
the somewhat non-traditional pre-race kiss. 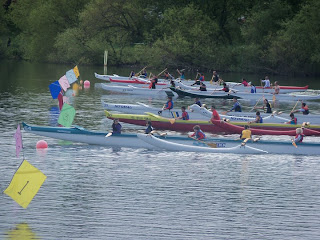 At the start! K is the smallest of the small,
on the far right in the closest canoe. 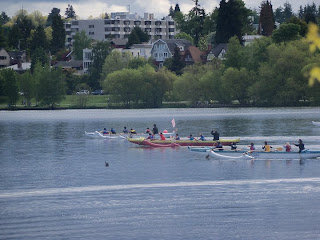 And under way, though you wouldn't necessarily know this,
given the amount of bow wave each canoe has....
And it was good.

Most importantly, the children all had a blast. K was nervous, but she showed up and get into the canoe and paddled like she knew how. We'd practiced the day before, sitting on stools in the living room, holding onto kitchen serving spoons, practiced changing from side to side, practiced keeping in time with the paddle ahead, practiced the motions just so everyone would be more comfortable with it.

Our canoe finished dead last, but that didn't matter. All the paddlers enjoyed themselves, and almost as important, L understood that she wasn't going to get to go this time, and there was no real fuss about it (I hadn't been sure how that would go).

K says she wants to do it again, and L wants to try as soon as she is old enough. All in all, a success at Green Lake!

* here's the thing about K and her pre-practice meltdown. I can understand where that comes from. She's like me, unfortunately, and doesn't like to do things unless she knows she knows how to do them. Which is a hell of a roadblock to throw into your path. She was nervous, scared, and felt she didn't know how to paddle so didn't want to make any mistakes. I can identify, and commiserate.

Luckily, our steerswoman completely understood (she's a mother, after all, and a very empathetic person). The practice was low-key and mostly just a familiarization of being in the canoe. They did things like look at the Space Needle, and paddle over toward a family of Canadian geese that made the mistake of crossing paths with a canoe full of kids. In short, the focus was on having a positive experience, and that carried over to the race itself, where it was about the experience rather than winning/losing.
Posted by pvz at 7:37 PM