.. they didn't even look like clouds...
Having 2 children is wonderful, when it's not horrifyingly exhausting/challenging/overwhelming. Watching the girls play together can be a hoot and a lot of fun. At least when they aren't fighting.
And to be fair, they most often play together well, whether with horses, booster seats, dollies or... did I mention horses?
An (apparent) digression:
A book I've been reading talks about commonly held myths of child-raising, one being that children with siblings have better social skills. The assumption aparently being that because they have constant interaction, built-in companionship, they learn social skills earlier and better than only children ("onlies").
According to this book, research is starting to disprove the assumption and to suggest that in fact the opposite is true, that only children have better people/social skills than those of sibling children. One suggested reason is that the way siblings interact tends to not be particularly socially acceptable. when you're interacting with your brother/sister, you don't have to be especially nice because they're going to be your brother/sister tomorrow too. But when you interact with a friend, you have no guarantee that they're going to want to continue being your friend unless you treat them nicely.
The good news is that not all siblings are doomed to poor social skills, nor to disfunctional relationships. Research suggests that siblings who play together, or who can learn to play together, have a much better chance of remaining close throughout their lives than those who mostly don't care about one another. So some efforts have been made to teach siblings how to play together, to problem solve together, to compromise together.

A return to the story:
With all of this muddled in my head, I was faced with this yesterday morning:
This was really something to experience, which those of you who've been in the jet stream of one of L's meltdowns might be able to imagine.
L has been a mess lately, falling apart at the slightest problem. Like being asked not to pull things out of a wallet. Or being told she wasn't going to get dessert if she didn't eat her dinner. It's gotten to the point where I tend to ignore her, at least for a while, and try to let her cry herself out. But that's not an ideal approach for any number of reasons, not the least of which is that we have a sobbing, door-slamming child in our midst until she gets over whatever it is she's upset about.
Yesterday morning I was motivated partly by the desire to get L quiet, but also partly by the idea that this was a chance to see what would happen if the girls worked together. I'd been thinking about this notion of siblings playing together and problem-sovling together, and I wanted to see what would happen. And it worked! Man, how it worked! It was amazing how L responded to K. (And I know from experience that she wouldn't have calmed down if I'd gone up there!) 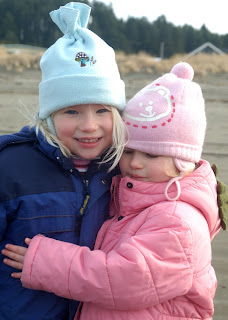 Sisters, Washington coast
1/31/11
Obviously there are all sorts of things that could have short-circuited the success of this:
But none of that happened, and I was struck by the fact that, other than making the suggestion to K, I didn't have to do anything besides stand back and watch them. And that's awesome. But even more awesome is the idea that maybe more of this approach could help streghten their bond for the future.
Posted by pvz at 7:07 PM

WOW! I love this! It's a huge moment, and shows a lot of maturity on both their parts. Just watch out... they'll be plotting against you & M before you know it! :-)