I was going to entertain you all (?) with tales of the day, but I'm too tired to do it justice.

L had 4 or 5 separate meltdowns, one of which marked the end of our visit with the Issaquah cousins, broke a wine glass (not while drinking wine!), pushed over a water glass, slammed several doors and spilled several gallons of tears, and is now sleeping hard in her own big girl bed. 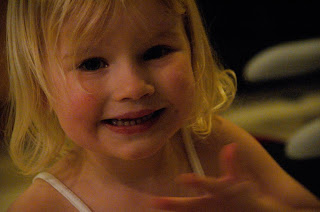 Curiously, NOT crying!
It remains to be seen if she manages to do better in it tonight than she did last night, when she woke at 10.30p and then several times after that, before I finally caved at 3.30a and in the interest of sleepsleepgivemesleepanywayanyhowdoesntmattersleeeeeeeppppp! just moved her into my bed, thus undermining months of strict policy. And then she wanted to go downstairs this morning at 5.45a.

She's exhausted, barely made it through the bedtime songs, and is possibly coming down with a cold.

All in all, another Saturday at the crazy house.

The cycles kids go through are fascinating, when they aren't infuriating. Sometimes they're both. We've been through a couple really bad spells with K, and now it seems like it's L's turn. K didn't have much attitude at 2 or 3, but at 4, when she started full day school, things went south for a bit. L seems to be hitting the wall earlier. And L can turn on the waterworks. She's a crier. She can spill tears at something as small as a piece of paper that's bent the wrong way. Real tears. Running rivulets down her round cheeks.'

But after all the struggle, the sobbing and then yelling, the slamming of doors and stomping of feet, she still pointed to me when I asked what she was grateful for tonight. (K on the other hand, runs through her list "fambly, mommydaddyLmyself" like some kid in church doing the Lord's Prayer) And as I put the girls to bed I said, "You both know that I love you, no matter how frustrated I get?" And L said "And no matter what we do, you love us Daddy?" And I nodded and said, "I don't always like what you do, but I always love you."

It wasn't such a bad way to end a day that had it's share of struggles. 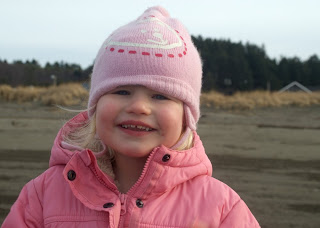 This song contains one of my favorite versus in all modern music, and today when the girls and I moved into the living room to have a fire and play "Daddy, you the jump and we're the horsies" which involves me lying on the rug while they throw themselves over me, I put the ipod on shuffle and this was the first song that came up.

Children go to sleep now-- you know it's gettin' late.
I know you don't like to miss nothin' and school ain't that great.
Oh, I'll dance with you when you're happy,
and hold you when you're sad,
and hope you know how glad I am,
just to be you're Dad.

Not a bad sentiment to end the day with either.

Does college seem too far away for your needs? Do you feel like you can not afford to pay for it? The great thing is that single parents are now helped by different funding programs.A student loan is one of the options. But the bad side about this is that you will have to give the money back. Still, you need to know that there are many programs specially created for the single parents. They are grants for single parents. They will give you the chance to obtain financial aid. Learn more:

We're right there with you. Austin was in FINE form this weekend. I can only imagine it's partly a cold, and partly trying to test boundaries. And keep hoping it's just a phase... Good luck to you guys.

K&L: Sleep!!! Everyone will feel so much better!!