Given the somewhat frazzled nature of yesterday's post, I figured I'd provide some balance with this one. In today's photo of the girls with their friend Ainslie, everyone looks blessedly happy for a change.... 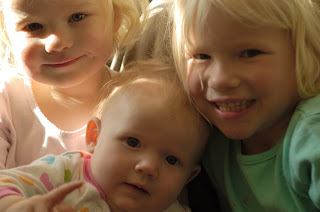 Trio
August, 2010
One of the aspects of this picture I love is L's expression. She looks like she's posing for an album cover. In fact, they all could be posing for a cover. Too bad K&L can't sing....

And for those of you who might be curious, "jersey day" went relatively smoothly, largely because K decided not to care about wearing a "jersey" and instead opted for a dress and leggings. (Add "leggings" to the list of clothing items about which I knew nothing before having girls.) I helped her get dressed, and carefully shielded the dirt stains on one legging knee with my hand. It's the sort of thing that, noticed, could result in a required outfit change.

Today, however, is "inside out day" and though that might strike many of you as a relatively simple challenge, it apparently isn't. To quote M last night as we lay exhausted in bed, "K may just be someone who can't wear her clothes inside out." Which, now that I think about it, fairly accurately describes me as well. I'm not big on inside out clothing either.

At least not intentionally.
Posted by pvz at 4:34 AM