note: This is a potty post. You have been warned. Further, I'm sure this is an issue not original to us, or even that interesting to anyone other than us, but given the sparseness of my posting lately, I figured it's better than nothing....

A few days ago, L needed to go to the bathroom. She's mostly in underwear now (Dora*, if you want the details), and has been doing fantastically, even to the point of napping in them with only one accident so far. 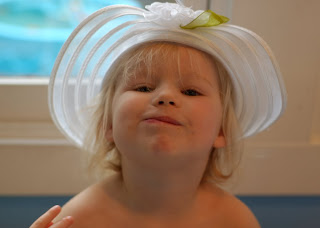 So there you have it, another potential teachable moment, down the drain (so to speak). Almost immediately after we were done, I began wishing I'd just let her go ahead and try. The worst outcome wouldn't have been all that bad, and it would have been one less experience of being told she couldn't do something. I'd much rather she think she can, and discover whether or not she was right, than get used to being told what she can and can't do.

Daddy fail. But damn it, the next time she proposes standing up to pee, I'm behind her, 100%. Behind and about 5 feet back.


* About Dora: we haven't seen any of the TV shows for Dora, but I can state with certainty that the tie-in Dora "books" are some of the worst-written things in the "teach kids some non-English words" universe. The writing is ... well, childish and simplistic. And condescending. To imagine that this junk would appeal to kids! Compared to something like Winnie the Pooh (which, admittedly, was not trying to teach any non-English words), it makes me want to cry every time the girls pick one of the books for me to read. And they do, regularly. Which means that 1) they like them more than I do, and 2) I'd probably fail as a children's author because, what do I know about what appeals to kids!?!
Posted by pvz at 6:45 PM