... baby, the first time in this school. Or, "just like starting over."

The girls have just started school again, and this time a new school (more on that in a separate post, if I ever get my act together). But most importantly, a few photos: 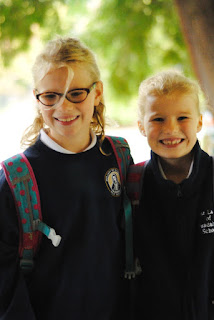 first day, 9/1/15
(you may be able to intuit a bit about the new school from the outfits)

And with a new school comes high stress levels, which we've been dealing with much of the summer, but with increasing amounts as summer ended. It's hard to change schools. K had been at the old school for 6 years, and L for 4, so the change is huge for them. But they're doing a good job of handling it well (for 9 and 7), including occasionally help each other out. For example, later that same week, after M went to work, L had a hair emergency that she decided I couldn't help with. Enter K to the rescue: 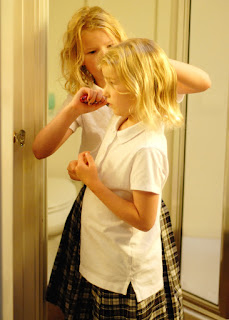 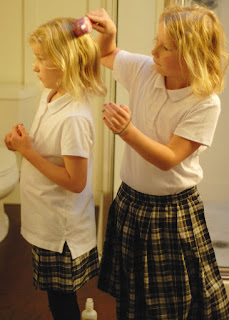 I loved that K offered and that L was willing to let her help, and that I had enough time to grab my camera.

What's worth noting, and may go without saying, but I'm saying it anyway, is no matter how "prepared" we were for the stress and resulting behavior, it still caught (and catches) us off-guard at times. The girls hold it together at school, where they're the "new girls" but once at home, things can quickly sour. We've had a lot of tears and meltdowns and blowups, and yet I'd say overall that things are going well. There was concern on their part that they wouldn't be able to do the academic work (we weren't really worried, but they had nothing to compare their previous experiences against) - that's a non-issue it seems. They are able (for the most part - L has had some challenges with the math as it is done in their new school, because she didn't have the intro that all the other 2nd graders had last year), and the concerns don't seem there. But not having a circle of friends, not knowing people, not wanting to be the center of attention, all of that is pretty draining for a grownup, and these are young girls. Luckily, the environment is quite supportive (one major reason we decided on this school) and I think it's just going to be a matter of time before they settle in.
Posted by pvz at 10:55 PM