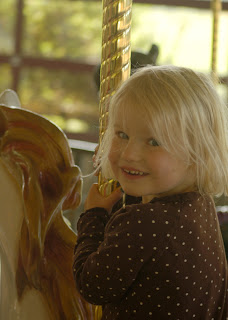 or, scrambling to close out the year with some backed up half-written posts, I found this one nearly complete so you're stuck with it. Besides, M is taking the girls to the zoo today, so it's apropos. Sort of...

Last Sunday Some time back in September (I think), we did a father-daughters trip to the zoo in order to get the girls out of the house, and all of us out of M's hair for a bit. It was cloudy and windy and seemed to be threatening rain, but this is Seattle and if you let those kinds of things change your behavior, you're going to be stuck inside for 9 or 10 months of the year.

We've got a zoo membership, which means we can come and go as we please. It also means there's much less pressure to "see all the aminals" because we can always come back, and it doesn't feel like we've spent money so we need to squeeze full value out. So, I do my best to let the girls call the shots.

Me, I would have liked to see the brown bears. It seemed like the sort of weather they might like, and I have seen them swimming in the "stream" right at the front of their exhibit. But, L wanted to ride the carousel and K wanted to see the penguins. And they both wanted to show me the
dinosaurs that were there the last time they visited.

Sadly, the dinosaur exhibit was over:

L: Daddy, they aren't real now. They used to move and make noise, but they're not doing that now.
me: Nope, the exhibit is closed now. But they weren't real before. They're models.
L: Yeah, they're dead.
me: Well, no, not exactly. Dead means they were alive, but these were never alive.
K: But dinosaurs were alive. They just aren't now.
me: That's right, they were. But these aren't real dinosaurs, they're models.
L: Yeah, they're pretend.
me: uh....

The weather and the early start on a Sunday meant that it was wonderfully quiet. We started at the penguins, which were hanging out next to the water. All except for one that was swimming (very quickly) and popping up out of the water and diving back down, zipping along. The girls thought it was grand.

Next, an unscheduled stop at the photo booth so L could go inside and sit and pretend to be... doing something: 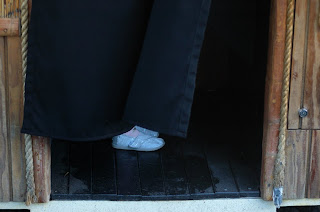 L, in a photo booth, with impractically white shoes
(doing... something)
Then, a swing by the jaguar, into the rain forest exhibit where we saw a yellow anaconda, a poisonous snake, some birds and monkeys, and got too hot.

Back outside, L wanted to go one direction while K wanted to go see the jaguar licking its privates. First two-on-one issue of the trip. I left L, ran after K, observed the licking with her, then pulled her back toward L who was threatening to take off on her own.

Skip the gorillas, the lions, head for the....

... flamingos where we briefly looked, then back toward the carousel. Still quiet, still calm, still manageable.

The carousel started as we got there, and L panicked briefly because we were missing it. I assured her that it would be stopping soon so we could get on. I bought tokens and gave them to the girls who each handed the man their two. And we chose our steeds.

K picked one whose name was Pal-o-mine, and L picked one called .... I'm not sure what its name was. But neither picked theirs by name, so it's not important. 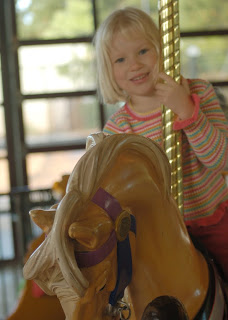 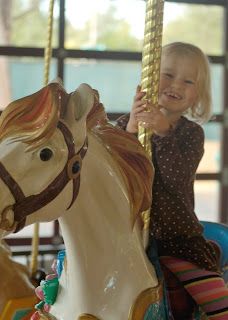 L, in heaven on who-knows-o-mine
I'd made clear to the girls that we'd do one ride and then go see the elephants and do another ride before we left. But sure enough, once it was over, L wanted to go again. We didn't. I reminded her of her agreement and we left, reluctantly, but we left.

On toward the elephants, but we passed the raptor center where a keeper had a big horned owl on her arm. We paused to listen to her say that you can identify them by their yellow eyes (the only other large owl we have around here is the barn owl, and they have black eyes).

Now to the elephants, which were outside enjoying the weather. And, glorious day!, pooping. 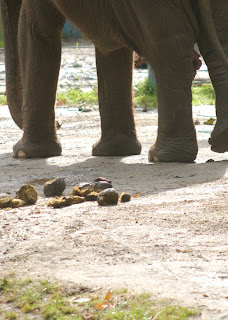 Freshly laid poop
(ELEPHANT poop!)
If you had to choose something to delight little children, a good choice would be animals pooping. And this is not just for little boys either. I've come to realize that little girls are as interested in bodies and bodily functions as little boys. I can imagine that the focus will change as we approach the teens, but right now there was general consensus that a pooping elephant was pretty darn hilarious.

And think about it - after watching and laughing, what would you do?

You'd check to see if the little girl watching nearby shared the same sense of humor as you and your sister. And she does! Of course!! 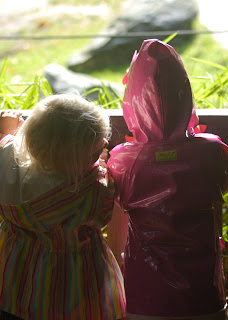 Does she...?
(Yeth!)
Next, dragging a bit, it's back toward the... carousel! After some snacks, and a turn with daddy's camera: 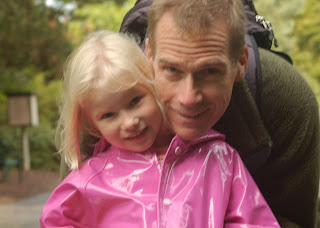 Photo by L
(photogenicity by K) 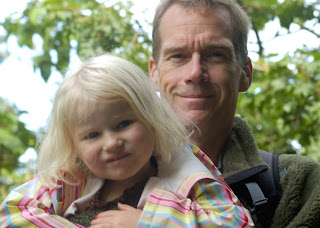 Photo by K
(attitude by L)
We went by way of the benches next to the bird area, where we happened on a flight show.

So we paused and found seats and watched as first a peregrine falcon flew around overhead, then a turkey vulture hopped out and flew back and forth, then 2 different owls. And all through this the keeper was telling us bits of information, like why the turkey vulture doesn't have any feathers on its head, and the difference between how the falcon and the turkey vulture fly (the falcon flaps a lot, the turkey vulture soars and glides). K seemed quite interested, but L was fading, so we compromised and watched the second owl fly and then headed slowly toward the carousel.

And when I say "we" and "slowly" I mean L and myself. K took off, running ahead out of sight.

I wasn't crazy about this, but couldn't do much about it, and figured she was relatively safe at the zoo on a Sunday morning. As we turned a corner in the path, a young woman with a Zoo shirt on asked if I was looking for a "little girl in red." I said I was and she said that she'd "gone that way." I told her we were headed for the carousel and that that little girl knew the way. The woman didn't seem to think much of my parenting approach, but all I could do was think "just you wait!"

By the time L and I reached the carousel building, K was inside.

Another ride apiece, and then we headed for the gate, the van, and some snacks. And home.

Something of note that happened later, when we were telling M about the things we saw, I realized that K was really paying attention during the flight demo. I mentioned that we'd learned things like why turkey vultures don't have features, and K said "Yeah, to keep their heads clean!" and when M asked why that mattered, K told her "Because they stick their heads into dead animals." Which is exactly right. She also remembered that the TV soared and glided while the falcon flapped a lot. It was very cool.