This weekend we achieved a milestone: K read to L.
I don't think you understand, so let me repeat myself:

K read to her little sister!!!
And when I type "read" I mean READ. Like as in sounding out the words (for the most part) and getting them right (for the most part). Dang it, I'm starting to think this Montessori thing might be worth doing on a global scale!

In order to adequately capture just how important this feels to me, let me back up and say that one of my earliest and most precious (in the valuable sense, not in the excessively refined sense) memories is that of sitting on the couch in our house in Puunene, "reading" with my parents.

Both parents were book people. We didn't even have a T.V. for several years after I was born. I remember watching John F. Kennedy's funeral on a borrowed T.V., and then later, we had a television that possibly my grandparents bought us, which would shock you if you touched it (which, now that I think about it, is great motivation for just leaving the thing going all the time!). And kids, when I say "T.V." I'm talking about something about 3 feet by 3 feet by 3 feet that weighed about 300 pounds and showed grainy black and white moving images on a 9 inch by 9 inch screen. It was AMAZING! If you're having trouble getting the idea, and you've ever had to pretend to be impressed by an ultrasound of a 2 month old embryo, it was a lot like that. If someone told you what you were looking at, you could kind of imagine it, right there on the screen in your own living room! "See that? That's Captain Kangaroo's spleen. And there's his kidney...."

But I digress. My parents were both readers. I can remember the exciting evenings we had in that plantation house, sitting around reading. Seriously. After dinner my dad sat and read. Crazy, huh? And because both mom and dad were such readers, we kids wanted to read to. Oh how we wanted to read. And be read to. And pretend to be reading ourselves. And (eventually) actually read. "I am Cubby Bear. I can climb trees...."

Trust me, it may sound like a version of hell to you, but it was glorious and wonderful to me. Books opened up magical worlds and I still love to dive into them, and I still have some psychological issues admitting that maybe I don't actually "need" all the books I feel compelled to buy.

So, K has been learning her letters and her sounds, and has been pseudo-reading for a while now. But just recently M mentioned that she really was reading. I didn't necessarily entirely buy it, but then I got to sit with her and help her through Go Dog Go. And then she read it to her sister. 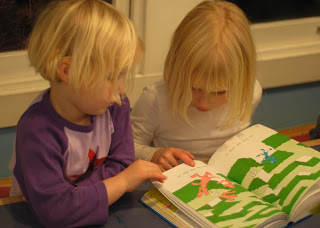 I understandably feel that my work as a parent is nearly done. And we managed quite admirably, if I do say so myself! And we'll just skip past the teenage years, if that's alright with all of you....
Posted by pvz at 4:42 AM