edit: Added a note at the bottom, about the girls' other grandfather, also a veteran.

Thank you, Dad, Grandpa Biddle, and all the other veterans, both in and out of my family, who believed in and fought for our country and the things that make it so great. 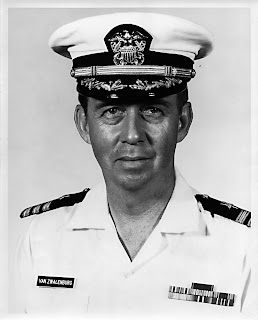 My father, late 1970s or early 1980s
Dad was 16 and attending Punahou in 1941 when Pearl Harbor was attacked. He told stories about seeing the puffs of dark anti-aircraft smoke over Honolulu, and about being torn regarding whether or not he should go to a previously scheduled appointment. This appointment was with some man and was related to Dad's Eagle Scout work. Everyone was supposed to stay off the streets and stay off the phones. Dad didn't want to leave this guy hanging, so finally called him. When he reached him, he was told "in nor uncertain terms that I should 'GET OFF THE PHONE!'."

The U.S. Army took over the Punahou campus, and Dad and his classmates attended school in temporary classrooms at.... Maryknoll? I'm not sure. And he went off to the Merchant Marine Academy after graduating, finishing up there in mid-1945 and expecting to be shipped out to the Pacific. I think he'd already been given his orders to report to San Francisco when the war ended.

He served in the Naval Reserve all the time I was a boy, and during that time I was vocally anti-military. This was the last 1960s and through the 1970s. Hippies and Woodstock and Kent State. Vietnam and Richard Nixon, the Paris Peace Talks, Chicago 1968.... I was now attending Punahou, and things were quite different, everyone was challenging the status quo. It was not the same place Dad had attended. (One year we had a chaplain who put Wonder Bread and Coke on the altar to represent in a modern way the staples of communion. I believe this guy was later charged with participating in the burning of the ROTC buildings on UH campus....)

I was young and though I may still believe some of what I argued then, I wouldn't argue it in the same way as I did. I'd like to think I'd be more understanding of Dad's perspective and his sacrifices.

It's only in the last 20 years or so that I've begun to get some understanding of what he must have felt, both as a citizen who witnessed Pearl Harbor, and as a father whose son resisted some of the things he believed in and stood up for. 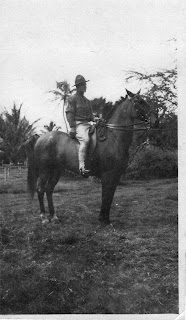 Grandpa, on his Army horse, Oahu 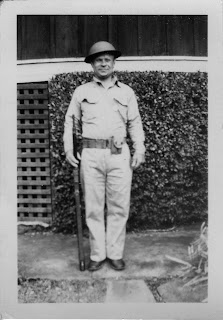 Grandpa, Civilian Defense
My mom's father was in the Army, the Cavalry in fact. He was part of Pershing's push into Mexico, chasing Pancho Villa. He told wonderful stories about those experiences, nearly all of them tales of his own ineptitude. He was a good story teller. After that, he ended up in Hawaii in the Army, fell in love, and stayed.

Like my dad, Grandpa witnessed Pearl Harbor. He was a civilian by that point and living with my Grandmother and mom in Kaimuki. He immediately tried to reenlist, but they wouldn't take him. He was working for the phone company, and I believe it was a combination of his age and his work (vital to the war effort) that kept him out of the Army a second time. But he joined the Civilian Defense Corps and served at home.

I have enormous gratitude for my father and grandfather and wish they were here so I could tell them in person, as an adult. I can only hope they understood that a boy may not understand all that he is given by those who precede him. My personal goal is to aim for that kind of understanding with my own daughters as they begin to question what their old dad thinks and to challenge what he's done and is doing.

Note: I wanted to add that my father-in-law, the girls' other grandfather, also served in the Navy and was implicitly included in my gratitude. I don't have a photo of him to include here, and as this has generally been written from my limited point of view, I hadn't called him out. But I think I ought to, and am doing so now, because he too did his part and deserves our gratitude and understanding.
Posted by pvz at 6:09 AM

Just wanted you to know that your sentence "I can only hope they understood that a boy may not understand all that he is given by those who precede him. " brought me to tears in the office Friday.

As I have a fishbowl office (all glass), it was a little embarrassing. But well written, and well done by your/our family & friends.
-j