So, last Friday was the great release of horses/ponies/all things horse-related in our house hold ranch. But in order to appreciate the full extent of the significance of this event, you need some background. Which takes us back another week, to Friday, 22 April, 2011.

An entry for the Things that Instill Fear list:

"Mommy, you should see what we're doing to the living room wall!!!"

An associated entry for the Things that Instill Terror addendum: 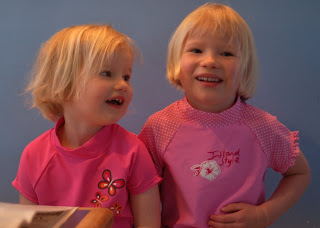 Friday was looking beautiful, warming up to something like a balmy 60 degrees, making everyone in the greater Puget Sound region wonder where they'd put their shorts, bikini tops, sunscreen back in September when we last saw the sun. After a busy day at work, I hopped the water taxi for a sunny, sparkling-water ride across Elliott Bay to West Seattle, where my family would be waiting for me, excited by the prospect of a fun-filled, egg-filled, party-filled weekend. And better yet, the forecast for Saturday was sunshine and mid-60s temperatures. It could hardly get better than this (especially as we had 15 children from K's class coming over for an egghunt to celebrate her birthday).

I used the 10 minute boat ride to wind down from the day, then swung by the store to do a bit of last minute shopping for our parties. Then it was home, where things were bound to be sunny and full of anticipation and excitement.

As I pulled up in front of the house, I saw M stomping up the steps to the porch, and the girls' heads looking out the window. I climbed out of the car and waved: "Hello the house!"

What I got back was a cursory wave and a rattling of the doorknob. "You let me in, right now!"

I busied myself with unloading the groceries, and by the time I had carried them around to the kitchen door at the back of the house, M had successfully regained access and was having words with the girls. She came into the kitchen, arms crossed.

I went and I looked. The girls were sitting on the stairs where they'd been banished, laughing and poking each other. The wall behind the couch was a canvas of... scribbles.

Over the next few minutes were spent alternately insisting the girls sit back down (still full of giggles) and scolding them on their behavior. I was most bothered by the fact that they'd locked M out of the house. I figured it was potentially dangerous, if something had happened to them. She was most bothered by the writing on the wall. She figured being locked out was a way to have some quiet watering time.

So, what punishment? There were any number of things we could have chosen, from no lipstick, to no videos (which would have been as much a punishment for us, to be honest). What we chose were no horses. None. For a week. Which, given that we *knew* there would be horse and horse-related gifts over the weekend, was perhaps not the best option.

Still, we delivered the news to the squirming, laughing girls, who said "ok" and didn't seem to register the impact beyond that. In fact, they simply didn't seem to acknowledge the significance of what they'd done, which is the A-1 guaranteed way to get your parents' goat. Our goat. M and my goat. It was got.

We were strict all that afternoon (a beautiful, sunny one, by the way) and strict all that evening, and then we wrangled the girls into bed. At which point K wanted her soft pony to snuggle with, and we said no, and there were tears and much wailing and gnashing of teeth. It was finally sinking in that she'd done something (what was it again?) that resulted in suffering. L, not so much. I think she was asleep before K even started to cry.

We weren't thrilled about it, but we felt we had to stand strong, so we told her we understood her being sad, but that it was her punishment, and that was that. She quieted down after 5 or 10 minutes.

Here's the thing. My feeling: drawing on the wall... isn't cool, but the locking us out bit is worse. What if something had happened? What if we needed to get in quickly? We've got a key hidden outside, but it would take time to retrieve. M said to me later that she remembered "outlining" flowers on her mother's wall paper, while their house was on the market. She said she felt she was going a subtle job of it, drawing around the edges of the flowers. Apparently her mother didn't appreciate the effort quite as much.

And that was the start of the birthday/Easter weekend!
Posted by pvz at 5:13 AM