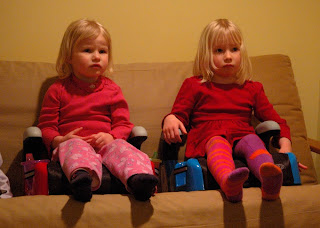 Mission: Basement, 2011
Looks like two astronauts training for their next mission, doesn't it? But it's not.

What you're looking at is phase one of another Daddy-only weekend. Which means... that nearly anything goes! And luckily, the gods of Amazon.com were with me this afternoon - K's new booster seat was delivered.*

So she and her sister (who's still too young to officially be in a booster seat, but unless I invite a policeman into the house, I think I'm pretty safe) are watching Saddle Club in their booster seats. It's only a matter of time before they think to call the seats "saddles."

Time for a beer!

*this would be the booster seat she had a meltdown about in the parking lot of Montessori School yesterday because it wasn't in the car. But that was M's pickup, so I don't have the juicy details.
Posted by pvz at 4:25 PM