I'm running behind, but here's the photographic evidence of how things went last month: 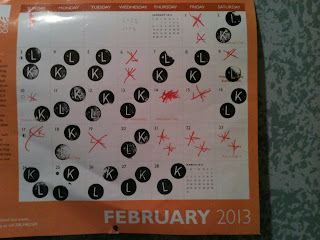 Which, as you can see, was fairly well. There's a rough bit at 21-23, but there's an explanation for that, which I'm partway through writing up for a separate post, but the short story is that this was the end of the girls' week of winter break and we took them to spend an overnight at the Weston Hotel.

There's also a one-two punch on 9-10, during which a neighbor accidentally left a chunk of his birthday cake on his porch instead of taking it down to Tacoma, and he left us a message to go and "rescue" it, which we did, and K ate some on 2/9 but L resisted, and L ate a piece the following day (but we didn't let K have any more). Still, over all I'd say things continued to go swimmingly, and we're that much closer to getting an AGD each!

I have to say that I've been impressed by their great jobs. More to come, no doubt!
Posted by pvz at 9:48 PM