Both M and I have been pushing at work, both of us with deadlines and too much to do in too short a time, and as a result we've been up too late and too early and a bit crazed. So, already stretched thin, I had one of those days at work where you get in feeling like you're a couple of espresso shots short of normal, and then there are recurring issues that have been raised and ignored and... and so you respond to a message that gets under your skin and you Reply All instead of sending the response just to the person who needs it.... and then you realize you just f-ed up. And things spiral and you end up barely salvaging your reputation and your personal sense of self by sending a public apology (along with private ones), and so when you get home that evening you're wrung out and even more exhausted than you would be otherwise, given that you've been getting up at 5a and working until 11.30p..... It was that kind of day for me last week. 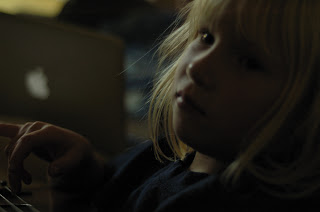 K, during another ukulele session


But I came home to my family and we ate dinner and I was quiet and a big down and we all talked about our day and I explained (in very general terms) how mine had gone and in response to the girls questions of "why you did that Daddy?" I had to say "I made a mistake. I apologized and there's not much more I can do about it", and then we moved on.

Later, as K and I sat on the couch starting to read our next Boxcar Children book, we had this conversation:

K: Why did you ... what happened at work again?
me: I sent a message I shouldn't have sent. I was mean to someone. It wasn't right.
K: Why were you mean?
me: I made a mistake. I was tired and upset and I said some things I shouldn't have said.
K: What did you say?
me: I told him he wasn't doing a good job.
K: Why?
me: Good question. I shouldn't have. But I was tired.

and at this point I could tell that K was getting embarrassed..... for me? I'm not sure, but she ducked her head and almost couldn't speak and it hit me that 1) I loved this girl who would feel this much about something her daddy did, and 2) that I ought to make sure I was clear about what had happened. So I told her:

me: Grownups make mistakes sometimes. It's not just kids. I shouldn't have said what I said, so I apologized to the man I said it to.
K (looking up from under her arm): Was he mad?
me: I think so. But he was nice, he accepted my apology, and we have to move on.
K: Do you wish you hadn't said it?
me: Yeah, yeah I do. But I said it and once you do something like that, you can't unsay it. If you feel like you made a mistaken, you need to apologize.
K: (silence, thinking)
me: It will be ok. He accepted my apology.
K: And it will be ok?
me: Yeah. I still feel badly, but there's not much more I can do. We all make mistakes sometimes.
K: You still feel badly?
me: Yeah, I do.

and when she was quiet a bit longer, I asked if she was ready to read and she said she was.

How much of this sinks in, I'm not sure, but it was a shared moment I was glad to have. And it made me realize that this daughter of mine might just be developing some empathy, after being the one baby on airplane flights who didn't start crying when every other baby did, who would watch and not react.... I hope I can do right by her. After all, she helped me feel better.
Posted by pvz at 4:38 AM