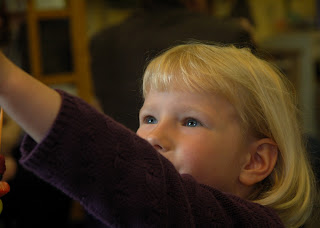 Last weekend we spent some time in the sun out in the yard, playing catch. K&L&a school friend all threw and caught the ball with me and it was good. The sunshine felt warm on my chest and shoulders and the yard looked beautiful (due to M's hard work). At some point L and their friend headed off to do other things and K and I were left to play one-on-one. And it was good.

K is at a point where she actually is able to catch (as opposed to back a year ago, when I'd toss a beach ball and it would bounce off her face, after which she would close her arms around... air - this is the stage that L is currently in) and throw, and we laughed and giggled and generally enjoyed each other's company in the glorious morning. I know K enjoyed herself, because she was fully of enthusiasm and little-girl joy. And because she shared this with me: