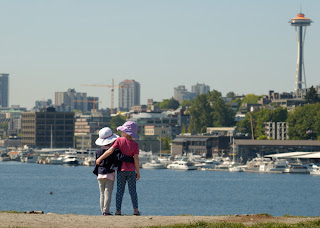 Just about the best gift a parent could have.

Yesterday was Mother's Day, which means that the girls have been very excited for days (if not weeks, though realistically that would require more focus and sense of the passage of time than is probably reasonable to expect from a 6yo, much less a 4yo who doesn't yet track day-to-day). They made some gifts for M at school, and we carefully hid these so they would be a surprise and M wouldn't find them.

(Turns out that L at least couldn't wait and spilled some but not all of the beans during a drive home from school one day - she mentioned the card she'd made, but "I didn't tell Mama about the heart I put on it. The heart is glued on both sides and isn't supposed to come off and I hope it doesn't come off because it's glued to the paper and I didn't tell her about that.....")

Over the last couple of days we had several conversations that went something like this:

But eventually the actual day came. I happened to be "sleeping" in L's bed because she called out "Mama!" in the night and since M had been working an event Saturday night, I went out and L saw me and asked in the sweetest voice "Dada, would you please lie with me?" so I crawled in next to her. And somehow actually fell asleep.

K woke up around 5.30a when the sunshine began flooding the room and I motioned to her to not make noise. She came over from her bed and said in a loud whisper, "Daddy? Can I go tell Mama happy Mother's day?" and it being 5.30a and M having been out working late the night before and all, I of course said "Sure." And K went in and woke M who was her typically gracious self and actually sounded sincerely pleased to be seeing her first daughter before 6a.

In short order, L work up too and joined her sister, which left me one L's too-soft/too-short mattress. So I got up too, and joined them to wish M a happy day, the girls went to bring their presents and M was appropriately appreciative, and then I went downstairs to make her an espresso and some waffles.

I quickly had some help: 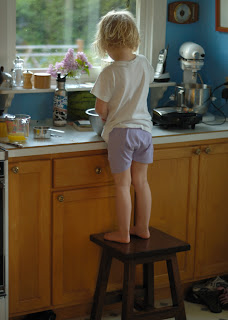 Shortly after I reminded her to cough into her arm and not into the bowl...
(want to come over for some waffles?)

And we all ate breakfast and drank multiple shots of espresso.

And the glorious thing about waking before 6a on a gorgeous Sunday morning in this town is, by 7a you're ready to do something with the day. Which, in our case, involved me finding something to do with the girls so that M could have some glorious alone time which she subsequently used to.... go shopping for the week. Pure indulgence!

It was a clear day, with the faintest hint of a breeze, so I told the girls we were going to fly kites. Until very recently, K has been very frightened by the idea that a kite could end up loose. But on this day (which is before this day on which I'm writing, if L is still reading) she didn't seem too concerned. And, since she'd been given a kite by one of her friends, she was excited to try it out.

We packed up and headed out to Gas Works Park, where we had, surprisingly, beaten most of the other folks who were likely to want to enjoy the good weather, and we remarked on the already overflowing garbage cans, we coaxed a couple of kites up into the glorious blue skies.

And though the girls had a few complaints about it being too bright, they both flew kites for the first time in their lives. And they enjoyed themselves immensely. As did I.* 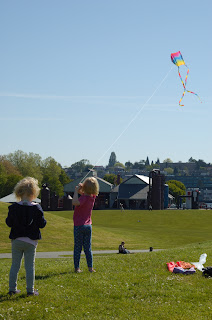 K, using body english to keep her kite in the air.
(L keeping a close watch) 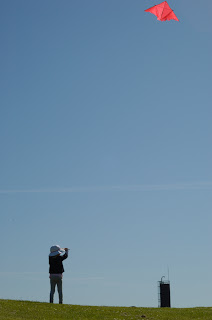 L, on her own with one of our big kites.

* One of the things we used to do, when we were kids, was hike up into the hills above our house on Waialae Iki ridge and fly kites on the tradewinds. We'd buy paper (or later, plastic) kites from Longs Drugs down at Kahala Mall, the same Longs Drugs at which we used to see Jack Lord in his wide-brimmed Panama hat, and make torn bedsheet tails for them, then sail them up into the wind. I can remember having to deal with long stretches of string that hung across cane grass and red dirt and haole koa, after a crash....
Posted by pvz at 5:35 AM