I was recently on Maui, and while there, bought 2 gen-u-ine Hawaiian "grass" skirts, made in the Philippines and sold in a tacky tourist shop in Kaahumanu Center. But what the heck.

K&L were thrilled, at least for a few minutes, during which I managed to capture this short video:


Near the end of it, you'll see L beginning to have a collapse of some sort (not sure what it was about - after all, if I cataloged every collapse, my brain would overflow in a matter of hours - but it, combined with the general analysis that the grass was "pokey" meant that this was the only occasion they really spent much time in their outfits. Which is fine. Expected even.

Maybe next time I'll bring home one for M...

For comparison and contrast, here's a photo of my grandmother (Mom's mom) in a grass skirt, not having a breakdown, in front of a palm tree: 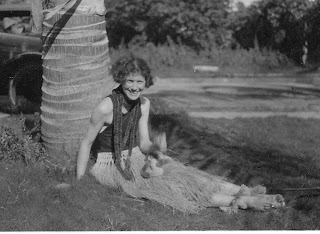 This would have been on Oahu, probably Waikiki in the early 1920s (other photos of her with my grandfather, both of them looking quite stylish and dashing in riding outfits, are dated 1924), and as a grandson all I can say is that the woman I knew never seemed the sort to try on a grass skirt, much less pose for a photo. Who knew!

Which only goes to underscore just how little we understand/appreciate our elders when we're little. Which is another way of saying that I'm sure there are photos K&L will find that will open their eyes about their parents and grandparents.