Note: I'm posting this from Haiku, Maui, where I'm taking care of some family business and generally not taking advantage of the tropical environment (though I did go paddling last Weds evening!). Which is to say, I'm missing M and the girls, and I found this, unposted, so decided to go ahead and use it. Nothing new here, but nothing out of date either.

One of the most amazing things about parenting is just how freakin' quickly the world changes, and when I say "the world" I mean the immediate world surrounding you. In other words, your children. 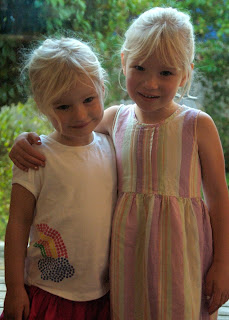 Sisters, First Day of School
Sept. 7, 2011
Which makes blogging a near-perfect technology for writing about parenting, because it allows you to change directions quickly, to post short, insightful tales, to keep up with the speed of change.

At least as long as you write and post your observations.

Unfortunately, to do that, you have to actually WRITE and then POST. Up with which I've not been keeping. So this is an attempt to catch everyone up.

Since the last significant post of any length, the girls and M have been to Birmingham (AL) and back, having spent a wonderful week+ with their grandmother and cousins. And from all accounts, it was a good visit that included a fair amount of swimming, some mani/pedicures that lasted through to their returns, a visit to the zoo, movies with the cousins, a brush with head lice and strep throat (neither of which seems to have made the trip back!), and a tropical storm that dumped enough rain that Grandmama's yard was under 15 inches of water. As I said, all in all a successful trip.

And one aspect of the trip that was especially heartening for me (and M, I'm sure) was that K and L were in good form, well behaved and charming. K is blossoming into quite a girl, at times becoming nearly responsible and considerate. At times. And L seems to be entering a phase of somewhat moderated tantrums. In fact both girls seem to be in pretty good "places" at the moment. Which makes life easier for M and me.

Except that I had a great, a witty and heart-warming and poignant post written up about how awful K was behaving towards her little sister. A post no one will read since it is now out of date. And will be until the next phase of the cycle....

Also since the last major post - school has begun, and we now have both a kindergartener and a preschooler. Both girls in school. Which, believe it or not, is a double-edged sword. On the one hand, it's... sharp(?) because they're both in school all morning. And o the other hand, it's ... also sharp(?) because L is only 1/2 day, and thus, instead of 2 drives of 40 minutes total each, there are 3, the dropoff, the pickup and the secondary pickup. Still, it's pretty exciting to have them both in school. And we have the Montessori bills to prove it!

At the moment, the major news for me is K. She's somehow managed in the last couple of months to almost grow up. She looks and acts and sounds like nothing so much as a young girl who's .... well, growing up.

She helps her sister out, she offers comfort and reassurance, she watches over her (she's nothing if not an eldest child!) and does her best to keep her out of trouble. Except when she's stirring the pot herself, which she also does. But overall, she's lots of fun, and according to M, she was a joy to be around for much of the Alabama trip.

L too is growing up, though for the time being, the gap between 5.5 and 3.5 seems larger than it has before. L still seems like a toddler, and is responsive to the vagaries of toddlerhood, just as K was. She's easily frustrated (more so than K was, perhaps, because she sees no reason why she shouldn't be able to do exactly what K is able to do), loving and volatile, sweet and mean. She's exactly what she's supposed to be, in other words. 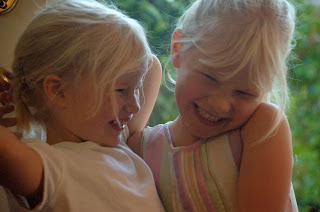