Sometimes the fascination of parenting comes from the study in contrasts it provides:

- there's the difference in approach between parents, which can be stressful and/or cause significant upheaval, but luckily M and I tend toward similar approaches, so we dodge this for the most part.

- and then there's the difference in outlook between siblings. 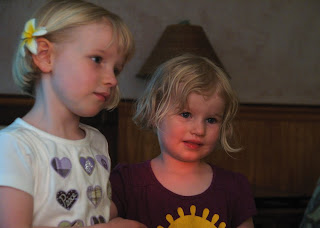 Maui, May 2011
This one provides us with regular opportunities to marvel that the two children we are somehow responsible for can be so entirely unique.

Wednesday morning I was responsible for getting the girls off to summer camp, which translates into "anything I accomplish is largely miracle." But the girls were on their best behavior so things went more or less smoothly. And we're in the "midst" of our summer (where midst = the 2nd or 3rd day), so it's been beautiful, with blue skies and temperatures in the low 80s. Perfect Northwest weather!

Before their carpool arrived, but after I'd finished sunscreening both girls, L tried on a sunhat that was lying discarded after our 4th of July weekend during which it was not worn once, even though it should have been, and when I said "That looks good. You should wear it today to camp" she said "That ladybug hat would be a good summer hat" and I said "That ladybug hat is a winter hat. It's wool!" and L added "I want mittens." I said.... "Ok, fine."

So L walked out the door wearing a pink knitted wool hat and matching wool mittens. (She'd initially wanted to also pack a backup pair of glubs, but at the last moment inexplicably decided against them.) And though I got what I interpret as one of those "does your wife know you're doing this to your daughter" looks from their driver, L was satisfied. I think she had a second coat in her backpack as well.

In contrast, when K walked out the front door and said "My legs are kind of cold," and I told her (because their ride was waiting, and any change in direction would cost us 10-15 minutes) "They'll warm right up. It's going to be warm today," she hesitated just a second, obviously not quite willing to concede anything, but ultimately she nodded and went on down to the waiting car.