Warning, this is probably scarier than anything you saw on Halloween: 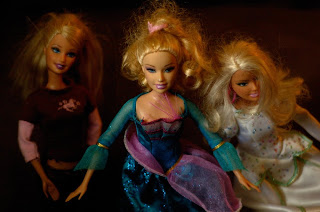 You're getting creepy....
Up to now, we've mostly managed to dodge the whole princess thing, at least to this point. But K and L now have some hand-me-down Barbies and I'm worried. At least one of the dolls is Cinderella. Or so I'm told. I don't know Cinderella from Snow White, but K seems to, and she assures me that this one is Cinderella.

The girls seem to like the Barbies, playing with them fairly often. They're not head-over-heels about them though, and that gives me a small glimmer of hope.

Disclaimer: I had GI Joes when I was a kid. Probably while in the 10-12 year old range. And these were the most awesome, original GI Joes. I had an astronaut Joe, and at least one of the older, soldier ones, the ones that were driven off market by the Viet Nam war. I wanted a frogman Joe, and a Jeep, but don't believe I got either. In any case, I thought they were cool. So I admit it, when I was a kid I did the "action figure" thing myself.

And my sisters had Barbies at the same time. Including Skipper (kind of a younger sister Barbie) and the Malibu Barbie (the one with a tan), not to mention the newly created bendable-legs Barbie (or whatever she was called). And beyond the fact that these Barbies were no where near as cool as GI Joe (he had a space capsule! and a rubber life raft!!) I don't remember much caring one way or another about them.

Now, though, as a dad, these dolls freak me out. They're very strange creations. They're adult women, for one thing, and not the kind of thing I'd look for as a plaything for my under 5yo daughters. For another thing, they're all about the belongings, the dresses, the accessories, the shoes and belts and....

But even worse are their bodies. I look at these things and, in addition to being creeped out, I wonder what message my daughters are getting, beyond the fact that they need to have large, pert, nipple-less breasts and long, narrow legs. Honestly, these things are like a cross between a weird porn toy and a regular kid's plaything. And I feel a bit awkward and embarrassed every time I'm asked to pull a dress on or off one of them. They don't seem to mind, don't even seem to notice, but I'm aware of this fake woman thing I'm holding in my hand. I have no problem with changing a diaper on a baby dolly, but to put a tennis outfit onto Barbie... ugh!

One odd update I've noticed - the Barbies these days seem to be wearing built-in underwear. I don't remember this from my childhood (not that I was checking either), but all of these have some kind of subtly embossed underpants on, a nod to someone's modesty. And I"m grateful for small favors like this.

I'm hoping this phase passes and that we move onto something else, like boy teen singers....
Posted by pvz at 5:23 AM