On Saturday (8/7) we held DaGrind 2010, the long-distance canoe race sponsored by my club (SOCC). This race usually takes place at Alki, so in salt water and from a sand beach, but due to a scheduling conflict we had to move it to Magnuson Park. Then, 2 weeks ago, the Harbor Patrol decided that we couldn't have it there, in spite of the fact that we'd gotten all the proper permits, etc. Soooooo, we (and by "we" I mean Sabine mostly) moved it again, this time to Lake Sammamish State Park. Which was fun for me because that meant Brook and Amy were more likely to bring the boys down for a little while.

Unfortunately, after a week of foggy mornings and warm sunny afternoons, Saturday dawned gray and got grayer, finally giving in to a drizzle that kept up all late morning and afternoon.

But we paddled and we had fun. The after-race bbqs were lacking in enthusiasm though, and many of us took home uncooked/uneaten food. For some reason, no one wanted to hang out and grill in the rain. Brook/Amy/the boys did come down, and so did M and the girls (surprising me!). They all stayed until the men's race started, then headed for drier weather inside their houses.

The women's Na Pali crew did well, coming in 3rd in their class, but they are a strong crew and felt that things never clicked for them this race. They've paddled as a group in other races this season, and for some reason this one wasn't one of their best. But even without clicking, they did well.

The race was an 11 mile loop, and was the first time this season that the men's Na Pali crew were paddling in a race together. It was also the first long distance race I'd done all season. I was a little nervous, which surprised me. We were in Po Anuenue, and that canoe is tight up front. 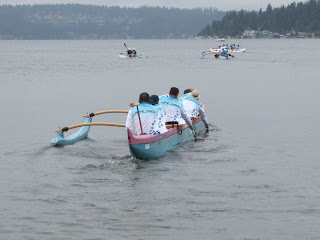 Heading to the start
(I'm in the hat up front)
Luckily, Matt stroked and I got to sit behind him in #2. He set a good pace and we got away from the start quickly, being in the first four boats. Over the course of the first couple of miles (downwind) the eventual winner (SSP) took off, and the eventual 2nd place canoe (Hui Heihei) followed them. We were in a tight race for 3rd with a Mountain Home crew, and they passed us still going downwind. The Anderson brothers were drafting behind them in their OC2. We did our best to keep up, and the canoe felt like it was moving well, but obviously not quite as well as the 3 ahead of us. We have not refined our downwind technique. That may hurt us at Na Pali.

Oddly, Matt didn't seem to give much of a damn when I pointed out there was a bald eagle flying overhead. Weird. I didn't take it personally though.

The truth is that the #1 seat is generally working their okole off and in comparison #2 feels "easy" in that all I had to do was match his stroke and pull with all my might. The other factor for the person in #1 is the size of the seat, and it is tight up front in Po Anuenue. I have to alter my stroke when I'm up there, and I know Matt felt it as well. All of which contributes to the pain the stroke feels. He also didn't care about the Blue Angels when I mentioned them flying over the ridge ahead of us. Double-weird!

When we rounded the first buoy, we were going across the lake to the west and the wind/chop was coming from our left (the south), against the ama. The canoe never felt unsteady though, and we managed to gain on the Mtn. Home canoe, nearly catching them before the 2nd buoy. DougM did an awesome job steering, and I thought for a bit that we would be able to round the buoy ahead of them, but it didn't happen.

Then it was an upwind push for another 6 miles, and we'd gain on them, getting within 25 feet or so, then lose ground. At one point I got into this odd state of mind where I felt that when I was paddling with significant rotation, we were gaining on them, and when I forgot to think about technique, we dropped back. It isn't realistic to imagine that my technique by itself would make the difference, but I was tired and maybe hallucinating and so I'd focus on technique and we'd seem to make up some ground and then I'd drift off and lose focus and we'd fall back....

Most likely I was hallucinating. Another option is that everyone was following me so closely that when I lost my technique they did too (probably not a likely scenario). The third option is that I alone was making all the difference as to whether we were speeding up or going slow. This is even less likely a reality than option 2. I'm going to have to go with hallucination.

The Mtn. Home boat was definitely aware of us. I could see their steersman glancing over his shoulder at us, and I know they were working hard to keep ahead. We did our best to stay with them, and I had brief thoughts of Doug calling a push at the end, but ultimately finished 14 seconds behind, as the 4th canoe in (3rd in our open class). 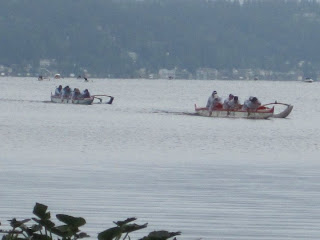 Trying to catch Mtn Home
(with less than 20 seconds between us, and
about 20 seconds from the finish)
I was tired, but not completely wiped out, and felt like we'd had the boat moving well the entire race. We just couldn't manage to catch Mtn. Home! 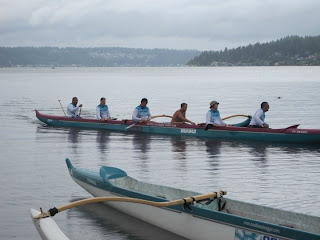 Aftermath
(I'm the only one collapsed with exhaustion!) 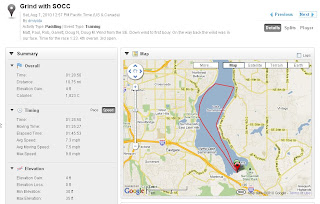 Men's Race - 11 miles
(7.5 mph avg, official time of 1:23:30)
Back on the beach DougM said something about thinking of doing the short course race in his OC2, and after a second I said I'd do it, so we rigged his canoe and went back out for another race. He steered from up front, and we paddled another 6.7 miles (it was supposed to be 5 miles but was long). 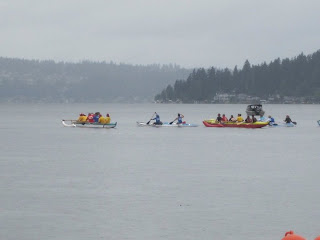 Pre-start
(I'm in blue, to the right of the yellow and red canoe)
We were the second canoe in, behind an OC6 (just behind by 22 seconds -- another one we didn't manage to catch!), and well ahead of everyone else. Which felt great. 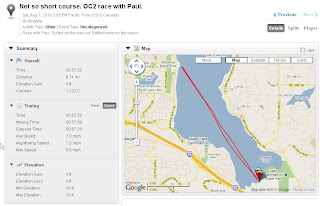 Short course - 6+ miles
(OC2 w/ DougM - 7 mph avg, official time 56:39)
The race was a push the entire time, but I expected that and it's not any different from a lot of our practices. I do wish we'd been able to catch the one canoe ahead of us, but what felt especially good to me was how quickly I bounced back from the first race. I felt good getting into Doug's OC2, like that race didn't impact what I had for the second race. It felt like the long workouts and conditioning have all paid off. Which is good, because next week we'll be on for 30 minutes, off for 30, on for 30.... through 38 miles. In bigger water than we're used to.

Now we head to Hawaii and the Na Pali Challenge this coming Saturday (8/14). Which promises to be something quite unlike anything we've done before. The wind should be at our backs but we seem to do better going upwind, and we don't have much experience surfing decent sized swells (no experience doing so as a crew - DougM has done it, but in an 6-man canoe the crew needs to be in sync).

Starting Weds posts here will be sporadic at best, until I'm home on 8/19. Wish us luck!

*photos stolen from Jocelyn's FB page. Thanks Buttercup!
Posted by pvz at 4:36 AM

ok, fb has tainted me, I want a 'like' button! And you guys look awesome in the new jerseys!