note: edited to add photos that capture some of the experience.

(since I posted anything specifically about paddling)

At the moment (8/2) there are 2 aspects of paddling occupying my mind:
So Saturday. It was, in case anyone has forgotten, the last day in July, and we spent 6 hours on Lake Washington, either paddling or waiting to paddle, covering a total of 40+ miles, and getting mighty cold while doing so. July. 30. 1st. And we were huddling in fleece and blankets and knit hats on the escort boat under gray skies and windy, choppy conditions. 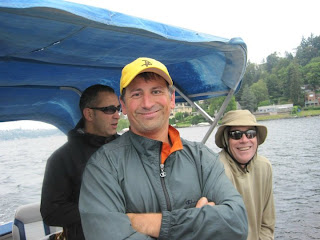 So, the conditions weren't ideal in terms of mimicking Kauai, temperature-wise. The other thing we can't replicate here is the water conditions. We have nothing approximating the open water of Hawaii, except possibly the Gorge at times, and we (SOCC) don't often get down there to paddle. I've only been once, and that experience wasn't the most confidence-building.

This means, among other things, that the escort boat is more fully loaded than usual. Most changeout races use a total of 9 paddlers, so there are only ever 3 waiting (there are races that use 10 or 12 paddlers). It also means that it's a lot of fun to have the opportunity to cheer on your women's crew while you're rehydrating and refueling in the escort boat. Except at the end of July in Seattle. When your lips are turning blue and you're wondering why you didn't bring long underwear.

In spite of these limitations, we had a great paddle. The women started (as they will on Kauai) and the men met them in the escort boat. We did the first change somewhere between Magnuson Park and the 520 bridge.

The routine is for the escort boat to run up ahead of the canoe, and the men jump into the water by seat number (6,5,4,3,2,1), with their paddles, line up treading water, and wait while the canoe approaches. The canoe stops (unlike typical changeout races where you're only swapping a couple of paddlers at a time), the men grab the gunnel and hand paddles up to the women who have unzipped their sprayskirts. The women stow the paddles, then jump out on the right as the men climb in on the left. As soon as possible after getting in, you zip up and start paddling to give the canoe some headway.

We were rotating seats, so I sat in seat 1 for the first piece, and I discovered that when the sprayskirt is on, I don't have enough leg room to put my off leg under my seat. That meant that I was paddling with both legs forward, not an ideal position, but I made it work.

I tried to set an aggressive pace, and the canoe felt like it was moving well in spite of a good headwind and some decent chop. I think we were all ready to get in and get moving, after being on the escort boat and then in the water.

I'm in seat 1, in hat and long sleeves
(and definitely not overdressed)
We powered south past Madison Park and reversed the swap with the women... I don't even remember where.... north of I90 for certain. (I remember this because by the time we were going under I90, we were passing Sabine her steering blade which she'd managed to lose. Lesson 1 from the simulation: always keep a spare steering blade in the canoe! It's bad enough to lose a regular paddle, but the steering paddle is key to the well being of the entire canoe. In this case Lisa passed her paddle back to Sabine until we were able to circle back around and pick her's up and pass it back to her. We'll have a spare on the canoe in Kauai.)

Then further south, swapping out again... somewhere before Seward Park where the wind seemed to be backing off so it was warmer and less wet. Continuing south, with the women taking over again near the south end of Mercer Island. Once they turned the corner, the wind was at our backs and was an advantage. (The wind should mostly be at our backs on Kauai.) The men got back into the canoe in the east channel and we paddled north.

The men were paddling when we reached Juanita Bay on the northeast side of the lake, and there were some pretty good swells we managed to surf, but then we had to turn west and take the wind/waves on our ama side, and things got a bit more interesting.

I could feel myself tensing up a bit. I was in Seat 2 at that point, and my body remembered the Gorge 2009 and I had to work hard at sticking with my good technique and proper approach. A couple of things that make unsteady conditions easier to take with this crew: DougM is an awesome steersman, Garrett is really "ama aware" and is good at slapping it back down when necessary, and we've been paddling as a group (more or less) for many months now, so are comfortable together and trust each other. Doug often says that the boat feels good and stable, which is a great thing because in bumpy conditions the important thing is to keep up our speed, keep paddling so we keep moving. It's that forward momentum that gives the steersperson the ability to correct.

It's also a bit counterinstinctual for me. When things feel uncertain, I tend to pause when in fact I need to focus on keeping the stroke regular and strong -- I've gotten much better at doing this over the year, and feeling like everyone else is reliable means that it's easier for me to focus on what I'm doing (paddling) rather than on what the canoe is doing (threatening to flip over).

We managed to do the west section without problems and then turned south toward Sand Point, where we did a change and the women got back in for their last piece. They paddled south past the boat ramp at Magnuson, and then the men swapped back in and we paddled back through Montlake Cut and into Lake Union, doing a final 40 minute piece to make a full 3 hours of paddling (for us).

I think we did 5 pieces each crew, with a couple of those being significantly longer than 30 minutes (the women's first piece while waiting for us in the boat, and our last piece heading home).

The final stats:
men -
women -
And a visual, for those who like to look at things: 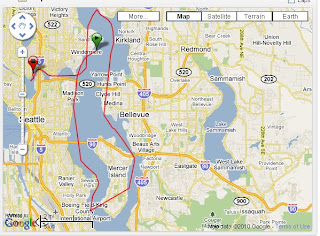 Note: The track looks a bit funky because this represents only when the men were in the boat, so the section that makes it look like we paddled right across Mercer Island is because we got out of the canoe at the southwest end of the lake, and the women paddled 1/2 way up the east side of Mercer Island.

We're all excited about the race, now that we've actually done a similar distance as a group and practiced the changes with an escort boat, etc.
Posted by pvz at 4:26 AM