Another in a (sure to be) continuing series of posts. 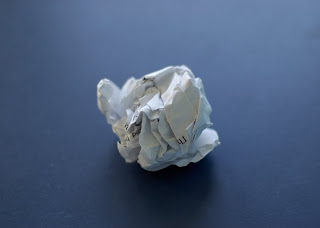 The Evidence
(taken as a reminder)
A couple of weeks ago, K & L were busy at the kitchen table, drawing. Things were going fairly well, in spite of the fact that earlier in the afternoon things hadn't been quite so happy. K had spent the entire day at school (still only a Mon/Weds occurrence) and that is guaranteed to tire her out. L had spent the day at Miss Ronda's daycare, also guaranteed to exhaust her. I'd been at work, which... never mind.

Anyway, we'd had our bumps that afternoon and I was madly trying to get dinner made while hoping to avoid parking the girls in front of a Saddle Club episode. I'm not the best at coming up with alternative activities when it's raining outside and we're all tired, but on this particular day they'd found paper and pens and were drawing.

We were walking on thin ice. But walking....

K asked me to draw her a horse. I dried my hands and did my best, then returned to dinner preparation.

There was some discussion behind me that went like this:

K: L! Stop it!
L (silent, but clearly not stopping whatever it was):
K: Stop it!

I heard a tone in K's voice that suggested to me she now had a look in her eyes that precedes a physical response to her sister. As I turned I saw her hitting L. L, seeing me watching, started to cry.

me: K, what are you doing?
K (holding out the paper with the horse I'd sketched): She's crumpling this!
me: L, why are you crumpling it?
K (turning on her sister): Don't do that! (hitting again)
me: K! No!
K (still hitting): Don't do that!
L: waaaaaaah!!!!!
me: Stop it!
K (still hitting): She's crumpling it!
me (stomping over there): Here, give that to me! (grabbing the sketch) I can do that! (crumpling the paper into a little ball and throwing it across the room)
K & L: (stunned eyes watching)
me: (embarrassed silence)
K: Waaaaaaaahhhhhhhh!
L: Waaaaaaah!
me: (embarrassed silence)

The next 5 minutes were spent calming girls down, drawing another horse on a new piece of paper, talking with L about not crumpling her sister's belongings, apologizing again to K, and finally turning once more to dinner prep. I may have also started a Saddle Club. I don't remember.
Posted by pvz at 9:15 PM