I've not posted much about Saddle Club lately, though it's not due to lack of interest on the part of the girls. I haven't been consciously avoiding doing so either. I think rather this shift reflects an attempt by M and me to redirect some of the girls' attention to other things in life. 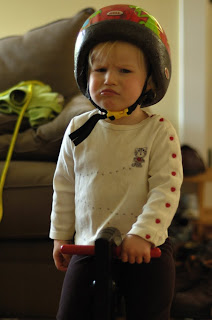 L, channeling how I feel
(about the second season of S.C.)
K got the second season for her birthday, and the girls have been indulging almost exclusively on those 3 discs since then. And yes, I still feel like watching every day is a bit much, and when we can we distract them with outside play and skip the video.

Key phrase: when we can. It's been pretty wet/cold/gray/miserable here this spring (which means it's pretty much been the usual spring around Seattle). And when it's nasty out and we're all tired of being inside, the natural thing to do is to turn to an odd series set in Australia, about 3 girls who love horses and get into all kinds of binds. But you know all this from conscientiously reading my blog.

What you don't know is that there are some significant differences between the first and second seasons of S.C.

For one: The production value seems to have dropped significantly. I'm not sure if it's the original filming, or just the transfer of the discs we bought, but the second season has that flat in-studio video tape look I associate with bad soap operas and low-budget cooking shows. Where the first season looked like it was actually shot on film, the second looks like someone took their 1980's era video tape camera and taped the shows. Bleah!

(Note: I'm not sure the girls notice or care about this.)

For two: The actors are all older (well, duh Daddy!), and the plots are less focused on horses and more focused on boys. Which is all fine. I fully expect that at some point in K & L's lifetime they will be (briefly) focused on boys (briefly, until they realize how dumb boys can be, at which point they'll return to more important things like.... horses?). But not at 2 and 4.

Honestly, they don't understand the nuances (and I use that term loosely) of the relationship stories being played out in the second season. And when they want to know what's happened, it's hard for me to know how much to try and explain.