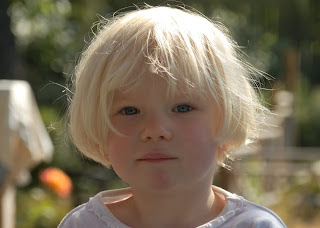 I've begun to realize just how attentive and sensitive K is. There's a time, early in a child's life, when it's pretty easy to talk over them, to keep emotions and reactions from them, and to shield them when necessary from less-than-pleasant aspects of life. That time is pretty much over for K.

She's always been an alert and observant kid, noticing airplanes and boats and bugs and the tiniest sliver of moon in the daytime sky. She'll ask why a truck that was on the street a week ago isn't any longer. And when we drive downtown and pass a spot where we once saw a policeman on a horse, she'll mention that as well. Now she's even more observant than ever.

We started spelling things out months ago, well before she turned 3. Soon after that she caught on and would ask:

She clearly recognized that we were talking over her head, in a way designed to keep information from her, and she didn't like that.

Most recently I've noticed that when I'm in a less-than-happy mood, she'll pick up on it pretty quickly and come at me with clawed fingers, saying "tickle, tickle, tickle." It nearly breaks my heart to realize she's trying to cheer me up. (L, of course, does whatever her older sister does, and so comes at me with her tickle-hands as well, grinning a huge, as-yet-clueless grin. It's only a matter of time with her as well, though the jury is still out on whether or not she's as sensitive to others as K is.)

I've decided I need to work at being present and conscious as much as possible when I'm with the girls. After all, this is the only time I get. None of this is available for a do-over!
Posted by pvz at 5:20 AM