It was our nation's birthday yesterday and I'm making an attempt to get back into the fight that is the regular posting to this blog, as much to capture these moments as to please any readers (who have long ago abandoned ship). And we watched a movie to celebrate. And this movie was an "American Girl Doll" movie about the doll of the year from 2012, a doll who lives in Seattle and is training for the Olympics, or at least dreaming of doing so.

About the movie, here's a Facebook post I did late in the day yesterday, which provides a bit of context:

you know you're a dad of little girls when you just spent the nicest seattle 4th of july in memory in the living room watching "mckenna, american girl" instead of getting outside into the sunshine. (and it was still worth it!)

The movie is about a 4th grade gymnast who injures her ankle and ... well, a friend's response to the post does a good job of summing it up:

Is that the gymnastics one where McKenna suffers an ankle sprain and has to take time off from training and in the meantime learns the true value of friendship and also overcomes a minor learning disability?

Our 4th of July evening in pictures (post in-yard picnic of fried chicken, french potato salad (or "freedom potato salad" as we called it just for today) and watermelon): 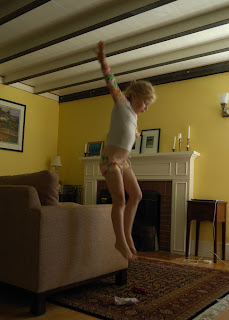 L, with a leap from our "balance beam" (aka, the couch) 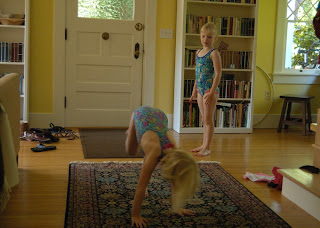 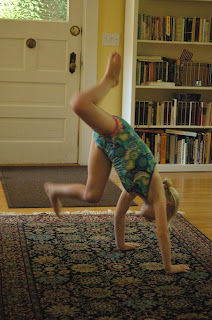 a prime example of K's cartwheel abilities
(and they're better than mine!) 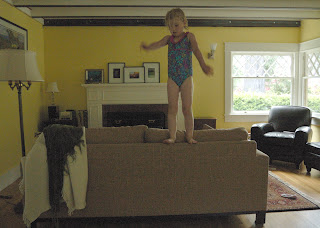 L, on the balance beam and ready to dismount!

The routines were a combination of foot races, ballet leaps, tumbling, jumping off the stairs and spinning in mid-air, some falling down (some intentionally - the "hurt ankle" aspect being very compelling to a young actor/gymnast), a fair amount of grunting, and some heavy breathing, post-routine.