Note: I woke up last Friday morning to what felt like distinctly fall weather, and realized I've not managed to get much posted this summer. In the spirit of getting things off my chest, this is the first of a bunch of "what we did this summer" posts. You're welcome!

We were watching TV, something we don't do a lot of in our house, due as much to time limitations as anything else, but also due to my belief that if the girls are able to keep themselves amused (whether it be with toy horses, dolls, flour and water, or crayons), it's better for them. But I'm getting sidetracked.

We were watching the Olympics and a women's bike race was on and since we'd been at the park biking the day before, the girls were especially taken by the images of the women pedaling hard in the pouring rain. There were a few crashes, nothing particularly damaging, but one that took out a couple of Americans, so got a lot of screen time, and there were the inevitable questions about how badly hurt the women were, and if they were hurt worse than when L got her burn, or when K got a scrape on her arm, and M and I were enjoying both the physical display of skill and athleticism and the opportunity to share examples of strong women doing physical things. 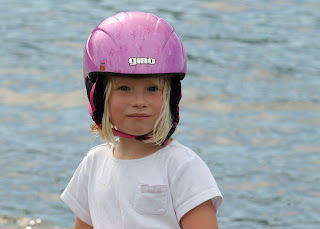 And then K finally managed to formulate her response to the spectacle.

K: Are training wheels not OK in this race?

I thought a moment and said that I suspected training wheels *would* be ok, if you wanted to use them, but that they would slow you way down, so no one uses them.

(Note: On rethinking, this may not be true. You may be required to use a 2-wheeled bike. Whatever.)

And we moved on.

Later, M showed the girls some water polo, but they found it boring fairly quickly.

In fact, they find much of TV boring, which I am pleased with. I'm less pleased with the fact that the commercials were quite compelling to the girls, sound off or sound on. Clearly advertisers know what the hell they're doing. And they're targeting the comprehension levels of 4-6 year olds. 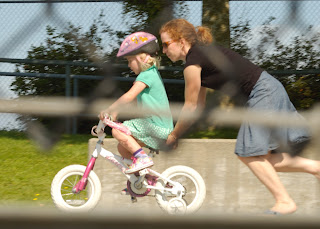 another upcoming olympian
(and coach)
Posted by pvz at 9:37 PM