There's a new game in town and its name is called "dominos!" 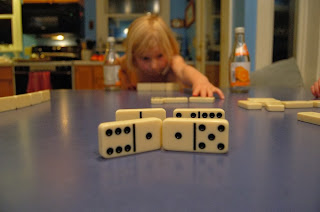 I recently resurrected a set of dominos that belonged to my grandparents (I think). They pack into a very nice koa wood box that was broken for years and which I just finally glued back together. The girls had no idea what dominos were, so we showed them how to stand them up and tip them over. And then we started playing.

K picked it up fairly quickly, with L not too far behind. I had to have the girls read the rules to me because they were printed in .5 point font. Translating K's interpretation was a challenge. And then M came and joined us and we figured out the real rules (she could read them, somehow) and all was good until K got 0 points 2 or 3 times in a row, at which point she quit and the rest of us continued to play without her. When she realized we were soldiering on, she came back to the table after missing a round, and promptly won 2 or 3 times in a row to win the entire game. So much for sportsmanship and good behavior.

Everyone had so much fun that K wanted to play again this morning (M was at an early morning spinning class and Miss L was fast asleep, putting in a good 12 hours). I got a Dutch Baby into the oven and then K and I laid out the tiles. I took a quick lead, 24 to 7, at which point my luck changed and K beat me 102 to 24. It was a great opportunity to show her how to lose gracefully (damn it!). 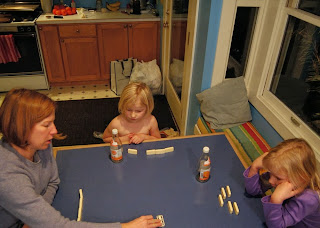 serious consideration of the tiles

*disclaimer - I don't know dominos from sugar beets, but we sure had fun!
Posted by pvz at 8:08 PM