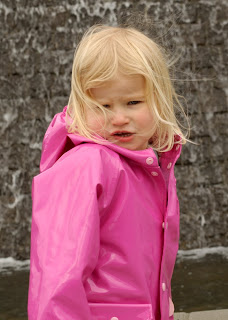 A picture I've probably used before...
but I don't have any handy from this last week....

I've never been one of those parents who wanted to make everything exactly equal with both children. It seems obvious to me that when one is older than the other (and maybe even when they're the same age), the experiences each has will be different. They're at different stages of development, have different interests and abilities and.... blah blah blah... I'm sure you're as interested in this line of reasoning as L was.

In any case, M prepared to take K to the party and I inherited a sobbing L. Who stopped sobbing when I suggested that she and I go ride a "city bus" down to the West Seattle Junction where there happens to be a Cupcake Royale, which happens to serve one of L's favorite food groups: sugar. She couldn't get her shoes on fast enough. We were walking out the door before M & K had pulled out of the driveway.

It's a several block walk up to the bus stop. Something between 1/4 and 1/2 mile. Which means that I fully expected to be carrying L part of the way. We made it roughly 50 yards. But that's ok, I'm strong, and she was in a good mood (drying tears leaving visible tracks on her cheeks). We wandered up to California Ave. where we waited in front of our favorite local pub grub place (Circa).

Taking a small child out in public is always "interesting." Especially so for someone like me who's instinctive approach to the world is to lay low, not be noticed, observe without being observed. That's pretty much impossible with a small child.

First, there's the constant question of whether or not she'll need to go potty. I made sure L went before we left, but that's never a guarantee of anything, and if there's one thing I dislike about parenting, it's needing to take one of the girls into a public restroom.

This aversion had nothing to do with the potty experience itself and has everything to do with the restrooms. I don't particularly mind needing to help one of my daughters in the bathroom, but I don't particularly like going to a public restroom even when it's just *me*. Add the complication of a child who is lower to the ground (and thus, lower to the germy surfaces), who is not particularly conscious of what to avoid touching, who doesn't seem to notice when clothing is dragging.... it's a horror I prefer to avoid.

So there's that. But there's also the small person's observations of the world that, while frequently interesting and/or eye-opening, can also be a challenge. Like "That lady is fat Dada." And when I mutter something about not pointing to other people, "But that's ok, everybody is different. Right Dada?" Uh, well, right, but how about we don't talk about it at the top of our 3 1/2 yo lungs?

Anyway, after a 10 minute wait, during which we observed passing people, trucks, dogs, and at least 1 bus that was not our bus, our bus pulled up. I had already prepped L about how you tell which bus is yours (teaching opportunity! "see, they each have a number, and ours is '55' so that's how you know what bus to get on." "But Dada, you can tell me, right?" Sure. Right.). It pulls up and the front door opens with a smelly blast of compressed air, and we climb aboard and wander back to a seat immediately behind the handicapped seating.

There are questions about seatbelts, about wheelchairs, about the bus itself. There is standing up while holding onto a handle, there is sitting in my lap, there is sitting on the seat next to the window, kneeling on the seat next to the window, handling the bell pull, deciding not to pull it, wanting to pull it.... until when, at last, our 7 minute ride is over, she and I pull it together and then get off.

I was going to get her a mini cupcake. So we get her a large one (pink frosting w/ sprinkles, white cake). I wasn't going to have one. So I get a large, caramel frosted one. And a pound of Stumptown Hair Bender! (Yes, we've discovered that we can buy our current favorite espresso roast from Cupcake Royale. Which means we don't have to make a special trip to Capital Hill to buy it.)

We eat, we wipe up crumbs, we wipe faces and hands multiple times. L wants to save the last of her cupcake. I don't want to carry it. Impasse! Until I ask if I can eat it. She and I split it. And then we are off, heading back toward the bus stop to catch another bus.

I notice that Easy Streets was selling Caspar Babypants' new album, but L doesn't want to stop by to buy it. I'm not sure why this is, but I respect her choice. (Note: if you're at all curious what a Nirvana song sounds like when done by an ex-pop musician turned kids entertainer, you should get this album, just for his version of "Sliver." He makes it so obviously a children's song that it makes me look at Curt Cobain in a new light.)

So we wait for the bus and when it comes, climb aboard and this time sit in the high seats so L can see and when I point out how the middle of the bus flexes as we go around turns she is fascinated and we have ourselves a blast, even including my carrying her all the way home.

We finish off our date with some water coloring, some books, and just as I am nudging us towards a nap K and M arrive home and things are transformed into their natural state (chaos).

It's a real treat to get to spend one-on-one time with the girls. We don't do the divide-and-conquer thing often enough, but when we do manage it, I nearly always find that my children are quite pleasant and fun to be with. Saturday with L was a special occasion for me. And the bonus for her, over and above the cupcake, is that now she's ridden 3 "city buses" while K has only ridden 2 (something K has lorded over L for some time now).
Posted by pvz at 4:47 AM