paddling: take me to hawaii nei...

The big news for our outrigger club is that we're planning on doing the Na Pali Challenge (Kauai) this August. 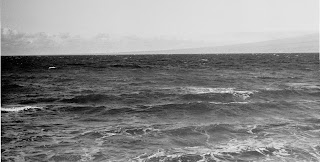 Hawaiian water (though not Na Pali)
Looking north to central Maui from Kaho'olawe
This race won't be like anything I have ever done before. It should be fun, with a bit of "oh shit" thrown in. The conditions aren't what we're used to here in the Pacific NW: north shore tropical lumpy. Some folks (Sabine, the Dougs) have experience in open-ocean Hawaiian waters (Molokai Hoe, etc.) but I'd guess most of us don't. I've sailed between Maui and Oahu in rough seas, and spent a fair amount of time in winter shore break, but paddling a canoe in swells is something I just haven't done. There's a need to coordinate as a team, both to keep moving forward, and to keep upright. We need to be in sync and in shape and working smoothly together. The only thing that's going to allow us to do all that is to spend time in the boat as a group. Boat time is key!

(I should point out here that I'm a tad nervous, if that isn't obvious already, and that this nervousness is at least partly due to my experience at the Gorge last year. I recently looked at photos from that day and just seeing the setting again drove a spike of adrenaline through my system. In retrospect, I think we shouldn't have been out there, at least not in the group we had. Until I manage to finish that race, it's going to weigh on me. Unfortunately, due to family plans, I won't be able to do the Gorge this summer. But I've got my sights on it for next year....)

In any case, I've got nothing but confidence in the folks I know are committed to Na Pali, so I don't think we'll have anything to worry about. Rob and I are the least experienced, and we're both comfortable in the water. The race should serve as a motivator to get us all out and paddling early and often this spring and even winter. After all, why do a race like that if you're not ready for it and in shape for it?!? At the moment we've got nearly a full men's crew (and, I believe, a women's crew as well). And the crew is a good one.

The course runs along the Na Pali coast, so it's not technically an open ocean paddle. But it is on the north shore, and if there's any kind of swell coming from the N, we'll be dealing with it. The great thing is, DougM (who'll be steering) knows how to surf the swells, and he's a good teacher, so unless things don't line up properly we should be able to take advantage of swells. It's gorgeous out there, though I've not seen it from the water. I've done the hike into Kalalau twice and enjoyed it both times, but that was a long time ago and entirely different circumstances. I feel like this is a real treat, a wonderful opportunity.

I'm excited, thinking about the strong crew we'll have for Na Pali. It's a unique race in that each team uses a 6-man and a 6-woman crew, and the crews swap every 1/2 hour. So the changeouts are the entire crew, rather than 2 or 3 paddlers at a time. We'll be using spray skirts (another reminder of the Gorge) and may have to do our changes with paddles, given that the men are likely to be using longer ones than the women. One more complication!

Speaking of "shape," we had a good paddle last Thursday night, a surprising paddle, given that there were 5 of us in an OC6, and I had been on a liquid diet for 2 days. The conditions were beautiful, smooth almost glassy water under us and a crescent moon overhead... gorgeous. It was almost balmy, for a January in Seattle. And because of the nice conditions we were able to head out onto Lake Washington.

The 5 of us made it down to the I-90 bridge and back in under 2 hours. 13.39 miles in 1:57. Wow! Our average speed just missed 7mpg (6.9) and things felt good. DougN sat in #1 and I was in #2 behind him, with Zachary and Jack behind me, and DougM steering. If you look at the image below one thing you'll notice is just how freaking straight Doug's steering was. Pretty amazing.

We were nearing the 1/2 point but were still a few minutes north of the bridge when we had to decide: turn around or go for the bridge. We went for the bridge! Later I told Doug I would have cried if we'd turned around without getting there. I mean, why not?!?

I like how we're paddling these days: strong and in sync. There's still plenty of work to do, but it feels so much better than, say, last year. Which makes me realize that I haven't yet been paddling for even an entire year (started last May), but things are feeling better and better.