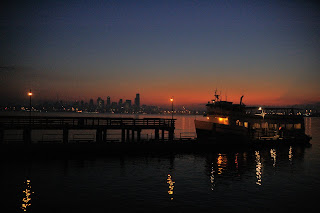 (this is a followup to a posting that I never made, last summer)

I ride to work on the King County Water Taxi (nee Elliott Bay Water Taxi) and last summer I noticed something disturbing. At uncomfortably regular intervals, old men would come up to me as I stood at the railing decompressing from my day, and want to chat. About the weather, about the captain (they're mostly women who seem fully capable of doing the job, and this particular old fart (OF) wanted to tell me that she didn't know what she was doing. I said she'd been driving me across the bay for several years without incident but it didn't seem to convince him. I finally just walked away from him), about the house they used to have in West Seattle....

I don't mind chatting up an OF now and then, but usually this happened when I was chilling out, clearing the cubical mind-numb from my brain. And then there was the issue of it being the same summer I was turning 50.

50! damn. I started worrying that these guys (who had never seemed to want to talk with me before last summer) were somehow seeing me as a kindred spirit. I was, in their eyes, one of them! But I was, like, 30 years younger than them.

Is there a moment after which you become an OF, even if you're young enough to be the other OF's son? Crap!
Posted by pvz at 3:22 PM